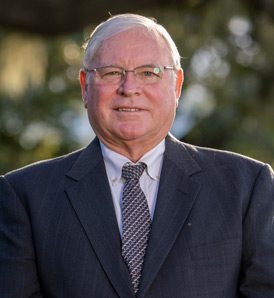 David L. Tedder is a multi-generational native of Beaufort, raised on the farms of the Sea Islands with his brothers and sister back in the fifties and sixties when the industries in Beaufort were focused on farming and the federal bases and Hilton Head was just beginning to grow. Starting school at Beaufort Elementary and graduating from Beaufort High School in 1971, David worked in construction in Beaufort before attending the College of Charleston and then entering the University of Maryland School of Law. Transferring back to the University of South Carolina School of Law in 1978, he received his law degree in 1980, and began his legal career as a trial lawyer with Dowling, Sanders, Dukes, Novit and Svalina when it was one of the largest law firms in the state.

Moving the focus of his practice into transaction and land use law, he practiced as a sole practitioner in Beaufort until July of 2019, when he associated in an of counsel relationship with Harvey and Battey. Back in the 60’s, his mother Betty worked at the County Legislative Delegation Office for Senator James Waddell and Brantley Harvey Jr.; David graduated Beaufort High School with Eileen Harvey as a classmate, and graduated USC Law School with William “Bill” Harvey, Class of ’80.

David has been married to Anne E. Tedder since 1982 (they met while he was in law school in 1980), and they have a grown daughter Kara E. Parker (Beaufort Academy Class of 2010), now a practicing Certified Public Accountant at UFHealth Shands Hospital at University of Florida Health, where her husband Steven is finishing his Ph.D. in Wildlife Ecology and Conservation.

He practices in municipal/government law, zoning and permitting, land planning and conservation, and real estate. He is a certified land planner (AICP) through the auspices of the American Planning Association. He served as City Attorney of Hardeeville for thirteen years, and has been County Attorney for Jasper County since 2015.

David is a member of the American Bar Association and South Carolina Bar Association. He is a S.C. Bar House Delegate representing five South Carolina counties, serves on the SC Bar’s Committee on the Unauthorized Practice of Law (past chairman) and their Professional Responsibility Committee. Since 2004, he has served on the ABA Standing Committee on Lawyers Title and Guaranty Funds, which became the General Practice Solo and Small Practitioner’s Title, Conveyancing and Bar Related Title Insurance Committee, where he serves as its Co-Chair and Chairman of its Research Task Force.

He has lectured on real estate and land development, municipal, and ethics topics in South Carolina, Florida, Massachusetts, Illinois, and California. He served as the City Attorney in nearby Hardeeville, SC from 2000 to 2013, has been the Jasper County Attorney since 2015, and has been Special Counsel to several cities and counties on land development projects in both South Carolina and Georgia, including supervising the creation of the initial Comprehensive Plan for the City of Johns Creek in the Atlanta metropolitan area, and assisting the City of Columbia with its Bull Street District in Columbia, the largest city-center development east of the Mississippi that includes the new ballfield for the Minor League Columbia Fireflies. He served on the Board of Directors for the Municipal Attorneys Association for South Carolina, is a past President of that Association, and is a member of the South Carolina Association of County Attorneys. He also serves the community as a member of various Board of Directors, including Broad River Health Care, 2003-2007 and ex-officio from 2007 to 2020; and as a Member of the Board of Trustees and officer (Secretary/Treasurer, Vice Chairman) of Beaufort Memorial  Hospital, 2007 to March 2020, when he had to resign due to term limits. He was also a founding member and director of the Friends of the Spanish Moss Trail, the volunteer group which shepherded the creation of the Spanish Moss Trail and its construction.

South Carolina, 1980
US District Court
US Court of Federal Claims